Self-described "rock artist" Donna Billick of Davis with the ceramic-mosaic sculpture of "Miss Bee Haven" that she created for the bee garden. This image was taken Aug. 17, 2010. (Photo by Kathy Keatley Garvey)
The making of a bee garden...

It was the fall of 2009 when a half-acre bee garden on Bee Biology Road, UC Davis campus, sprang to life.

A 10th anniversary celebration will take place from 10 a.m. to 2 p.m., Saturday, Sept. 28.  It will include sales of plants and native bee condos, honey tasting (honey from Sola Bee Honey, Woodland), catch-and-release bee observation and identification, and beekeeping and research displays. Several mini lectures are planned.

Visitors will see analemmatic sundial--the only one of its kind in the Sacramento area--and they can discuss the sundial with dial master and beekeeper Rick Williams, M.D. to learn how the dial was created and the links between human and bee perception of the sun. Visitors also will learn about "our research on bee use of ornamental landscape plants," said manager Chris Casey. In addition, visitors can "donate a book on insects, gardening, or nature for our Little Free Library," she announced. A honey bee, Apis mellifera, and a yellow-faced bumble bee, Bombus vosnesenskii, share a purple coneflower in the bee garden. (Photo by Kathy Keatley Garvey)
Complete details here: https://bit.ly/2lKHWyi
It all began with a news story. A feature on bee breeder-geneticist Susan Cobey, written by Kathy Keatley Garvey, department's communication specialist, drew the attention of Häagen-Dazs, a premium ice cream brand which depends on honey bees to pollinate many of the plants that form the basis of its ice cream flavors.  Häagen-Daz  initially donated $125,000, later increasing it to some $500,000.

Häagen-Dazs wanted the funds to benefit sustainable pollination research, target colony collapse disorder, and support a postdoctoral researcher.  It was decided to install an educational garden, conduct a design contest, and award a research postdoctoral fellowship to Michelle Flenniken (now with the Montana State University).

A Sausalito team--landscape architects Donald Sibbett and Ann F. Baker, interpretative planner Jessica Brainard and exhibit designer Chika Kurotaki--won the design competition. The garden was installed in the fall of 2009 under the direction of interim department chair Lynn Kimsey, director of the Bohart Museum of Entomology and professor of entomology.

Others who had a key role in the founding and "look" of the garden included the UC Davis Art/Science Fusion Program, founded and directed by the duo of entomologist/artist Diane Ullman, professor and former chair of the UC Davis Department of Entomology, and self-described "rock artist" Donna Billick. The art in the garden is the work of their students, ranging from those in Entomology 1 class to community residents. Eagle Scout Derek Tully planned, organized and built a state-of-the-art fence around the garden.

"The Honey Bee Haven will be a pollinator paradise," Kimsey related in December 2008. "It will provide a much needed, year-round food source for our bees at the Harry H. Laidlaw Jr. Honey Bee Research Facility. We anticipate it also will be a gathering place to inform and educate the public about bees. We are grateful to Haagen-Dazs for its continued efforts to ensure bee health."

The garden, Kimsey said, would include a seasonal variety of blooming plants that will provide a year-round food source for honey bees. It would be a living laboratory supporting research into the nutritional needs and natural feeding behaviors of honey bees and other insect pollinators.

Visitors to the garden, Kimsey related, would able to glean ideas on how to establish their own bee-friendly gardens and help to improve the nutrition of bees in their own backyards. July 15, 2010
Art Is Where the Community Is; Blending Science with Art in the Häagen-Dazs Honey Bee Haven

Aug. 1, 2013
Häagen-Dazs Honey Bee Haven Place to Be
With photo of founding volunteers 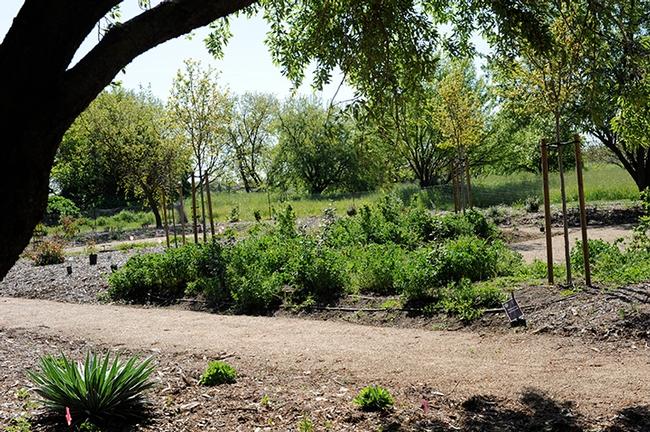 This photo, taken in 2010, shows the makings of the bee garden on Bee Biology Road, UC Davis campus. It was installed in the fall of 2009. (Photo by Kathy Keatley Garvey) 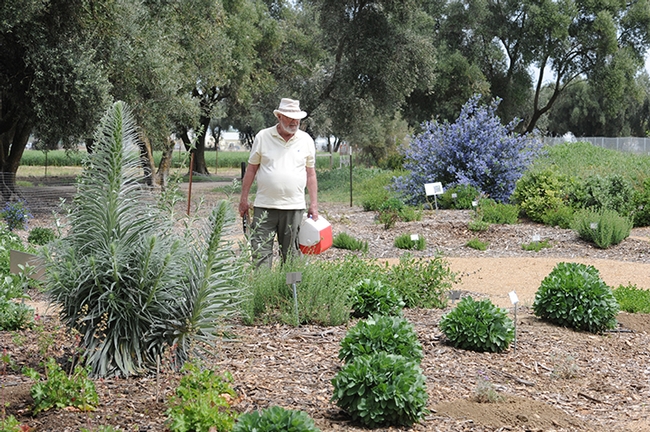 Distinguished emeritus professor of entomology, Robbin Thorp (Aug. 26, 1933-June 7, 2019), detected more than 80 species of bees in the garden. This image was taken in April 2011. (Photo by Kathy Keatley Garvey) 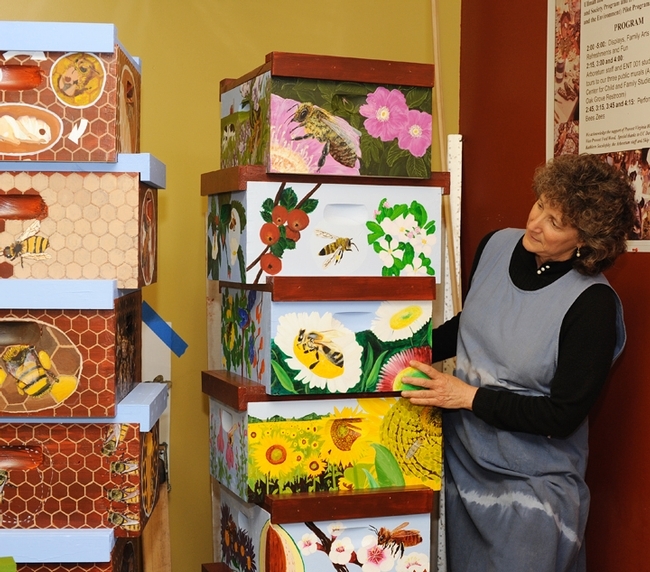 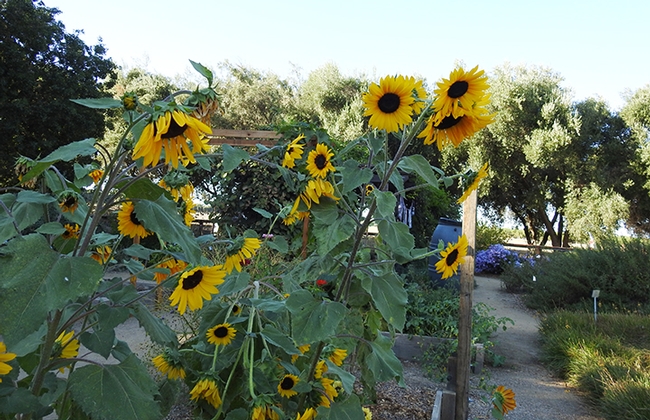