“This is the first paper documenting induction/stimulation of pollen germination by non-plants,” said Christensen, a doctoral candidate in the Microbiology Graduate Group who joined the Vannette lab in January 2019. “Nectar-dwelling Acinetobacter bacteria, commonly found in flowers, stimulate protein release by inducing pollen to germinate and burst, benefitting Acinetobacter.”

The article, “Nectar Bacteria Stimulate Pollen Germination and Bursting to Enhance Microbial Fitness,” is online July 28 and will be in print in the Oct. 11th edition of the journal Current Biology. California poppies, Eschscholzia californica, from the UC Davis Arboretum and Public Garden. This is the state flower. (Photo by Shawn Christensen)
“Despite the essential nutritional role of pollen for bees and other pollinators, we still know very little about how pollen is digested by anything!” Christensen said. “We found out that certain bacteria in flowers, Acinetobacter, can send a chemical signal to pollen that hijacks its systems and tells it to open the door from the inside--releasing protein and nutrients for the bacteria. In terms of potential significance; this bacteria can double the amount of protein released from pollen- so it's important for bacterial growth but it could also be exploited by bees or other pollen consumers to get more nutrition from their food.”

The question—“How do organisms actually eat pollen?”--has been a long-standing one, Vannette said, “because pollen is well-protected by a layers of very resistant biopolymers and it's unclear how pollen-eaters get through those protective layers.” Community ecologist and associate professor Rachel Vannette
“The bacteria have found what looks like a fairly unique and very effective way to get nutrients --which would otherwise limit their growth--in a flower environment,” Vannette pointed out. “It's a very neat biological trick. This finding opens the door for a lot of exciting new research: How do the bacteria do it? Given that Acinetobacter is often found on pollinators, do pollinators benefit from this? Could bacterial action on pollen make it more (or less) beneficial to pollen-eaters? And what about plants? Could the bacteria be reducing pollination by causing pollen to germinate before fertilization? We aim to investigate many of these possibilities in future work.”

“The finding that bacteria--in this case a specific genus of bacteria-- can cause premature pollen germination and release of nutrients-- is cool for a number of reasons,” said Vannette, a UC Davis Hellman Fellow. “First, Shawn's results are very novel--no one has described this phenomenon before! Second, Acinetobacter is a genus of bacteria that are very common in flowers. They are usually among the most abundant bacteria in nectar and are often found on other floral tissues, including pollen, stigmas etc.”

Christensen, an evolutionary biologist turned microbiologist, studies Acinetobacter and other nectar microbes and their potential influences on pollen for nutrient procurement, as well as the metabolomics of solitary bee pollen provisions.

The UC Davis doctoral student is a recipient of two research awards: the Maurer-Timm Student Research Grant, a UC Davis award for research conducted in the Natural Reserves; and a Davis Botanical Society research award, specifically for this project.

Shawn holds a bachelor of science degree in evolutionary biology from University of Wisconsin-Madison. “I studied reducing ecological impacts of phosphorus runoff, ethnobotany and domestication traits in Brassica rapa, botanical field excursions of all kinds, the evolution of chemical sets in the early origins of life, and now plant-microbe-pollinator interactions." 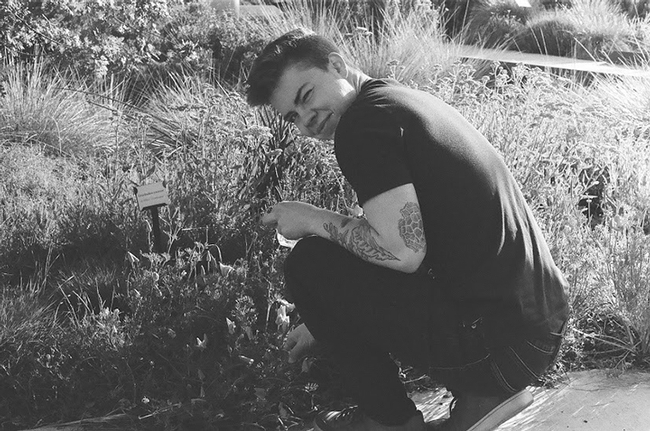 Microbiologist Shawn Christensen scoping out California golden poppies at the UC Davis Arboretum to take into his lab for experiments. Yes, Shawn says, the tattoo is of pollen grain. (Photo by Benjamin Van Domelen) 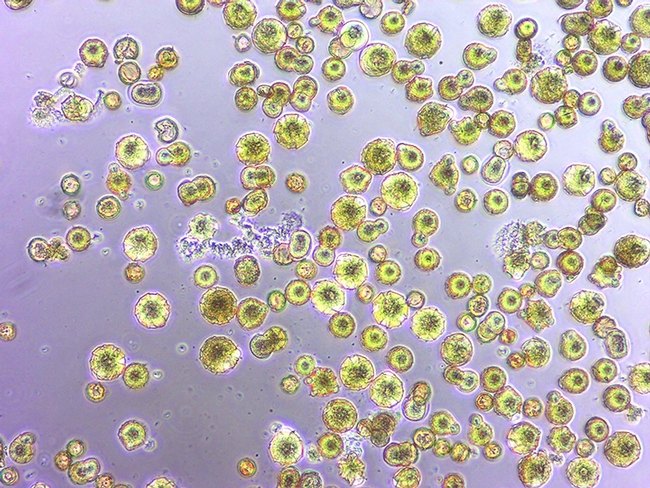 This image shows what the pollen looks like with Acinetobacter pollinis SCC477. Many of the pollen grains are germinating and bursting. (Image by Shawn Christensen) 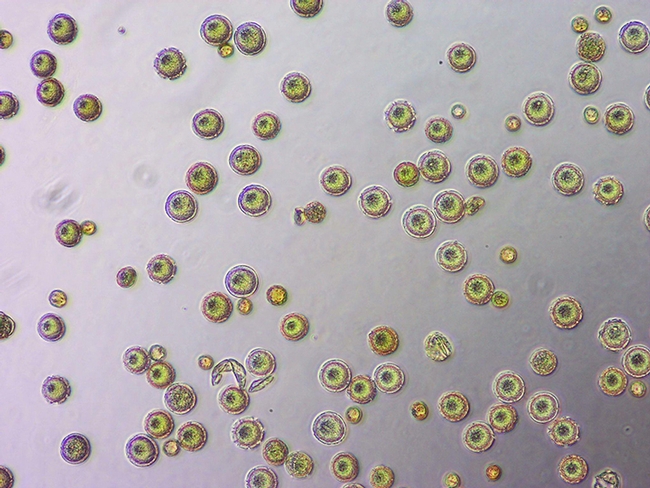